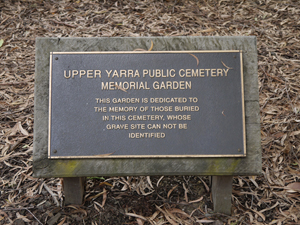 In September 1889 as the population grew and began to move away from Old Warburton, a request was made by the newly-formed Shire of Upper Yarra for an area of land, not less than 10 acres for a cemetery.

The present day site was determined by the Lands Department. Copies of the rules and regulations were duly signed and sent by the then Shire Secretary, William Cowan, to the Health Department in Melbourne and on the 9th of June 1893 the Government Gazette published details of location, rules and regulations applying to the cemetery.

Since that day the cemetery has undergone a number of name changes, each reflecting the movement of population. Situated on the border of the Warburton Village Settlement, it was first known as Warburton. It was subsequently changed to West Warburton, then Wesburn and finally Upper Yarra.